FORT DAVIS, Texas — Peruvian astronomers Jorge Melendez of The Australian National University and Ivan Ramirez of The University of Texas at Austin have discovered the best “solar twin” to date, using the 2.7-meter Harlan J. Smith Telescope at McDonald Observatory. Their findings suggest that the Sun’s chemical composition is not unique, as some previously thought.

The star, HIP 56948, is more like the Sun than any yet seen, and is 200 light-years away in the constellation Draco, the dragon. The star may be a billion years older than the Sun.

Only three solar twins were previously known: 18 Scorpius, HD 98618, and HIP 100963. But while they were all like the Sun in many ways, there was one major difference: the amount of lithium they contained. They all had several times more than the Sun. Astronomers wondered if the Sun was unique in its low amount of lithium.

The discovery of this new solar twin puts that question to rest: it has the same low lithium content as the Sun. The study turned up another solar twin, HIP 73815, that contains a similarly low amount of lithium.

The question of chemical peculiarities in the Sun is related to the “anthropic principle” — is there something special about the Sun that has allowed life to spring up in our solar system? Their findings don’t answer that completely, but they do show that when it comes to the Sun’s chemical composition, the answer is an emphatic “no.”

Melendez’ and Ramirez’ findings suggest the opposite, so-called “Copernican” view: It is possible that life is common elsewhere in the universe. They suggest that stars like HIP 56948 would be good targets for SETI (Search for Extra-Terrestrial Intelligence) researchers.

The star already has been studied by the McDonald Observatory Planet Search led by University of Texas at Austin astronomer Bill Cochran. His team found that, like our Sun, HIP 56948 does not host any “hot Jupiter” planets, those massive, short-period planets orbiting close to their parent stars, so common among the more than 200 stars found to date that host one or more planets.

Searches for “solar twins” are important because astronomers use the Sun as a baseline for many other types of studies. But they cannot study the Sun the same way they do the distant stars. It’s too close, and too bright. 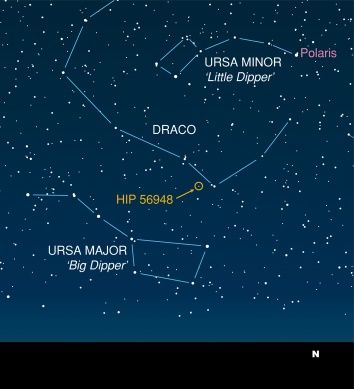