Astronomers Search for Quasars with a 'Kick'

HONOLULU, Hawaii — A runaway black hole barreling out of a galaxy at more than two million miles per hour? Evidence of a quick getaway in the aftermath of a massive intergalactic collision? That’s just what astronomers Erin Bonning of the Paris Observatory and Gregory Shields and Sarah Salviander of The University of Texas at Austin have been searching for. They are presenting the results of their search for supermassive speed demons today at the 210th meeting of the American Astronomical Society in Honolulu, Hawaii.

Recent theoretical predictions have shown that when two galaxies collide, their central black holes sink to the center of the resulting galaxy and begin to orbit each other while slowly emitting gravitational radiation. Finally, they get so close that they collapse onto each other, creating one giant black hole. Scientists have found that if the black holes are spinning in a particular way when this happens, the final black hole will get a kick and go flying away from the scene of the crime.

“The gravitational radiation shoots out to one side,” Bonning said. “The ‘kick’ from this causes the black hole to recoil in the opposite direction — like a rocket.”

Bonning, Shields, and Salviander have gone looking for these runaway black holes in quasars — active galaxies in which a glowing disk of hot gas surrounds the black hole. Matter in the disk nearing the black hole is heated by the violent orbital motion, causing it to give off copious amounts of radiation — a tell-tale signature of the omnivorous monster devouring whatever ventures too close.

They have searched the publicly available data of the Sloan Digital Sky Survey (SDSS) for quasars which show some evidence this kind of “kicked” black hole. They looked at the spectra of about 2,600 quasars. If there were a getaway disk moving through the galaxy, it would show up here.

“There are a couple of these quasars whose spectra raise suspicions,” Shields said, though none show definitive evidence of being “kicked-out quasars.” It would be interesting for someone to take these “best cases” and image them with Hubble Space Telescope, he said, to see if the quasar is offset from its host galaxy.

Their results, which have been submitted to the journal Astrophysical Journal Letters for publication,  are important observational data for scientists who simulate black hole mergers, since the strength of the kick is related to the spins of the black holes.

“We didn’t find nearly as many quasars with high velocity shifts as we thought we would, looking at the theoretical predictions,” Bonning said. “And even those quasars that were ‘shifty’ didn’t show any other evidence of being absconding black holes. They were more likely to be stationary black holes in the middle of a slightly more complicated quasar than usual.”

However, Shields said, “It doesn’t mean the calculations are wrong. It tells you that the sequence of events when the galaxies collide and merge, and their black holes spiral together, rarely — if ever — leads to the conditions that give this kind of kick.

“In order to see the ‘kick’ effect, it requires a special alignment of the merging galaxies. That’s statistically rare. Less than one in ten of these might get a kick of at least 1,000 kilometers per second. And if the merger does not occur when the black hole is shining as a quasar, it will not be visible.” The maximum possible kick, he said, is 2,500 km/sec, which could only occur when the two original black holes are of comparable size.

The search goes on. If it turns out that kicked black holes dragging accretion disks cannot be found, that will also be an important result. “Sometimes it’s more exciting when you don’t find something you’re expecting,” Salviander said.

However, continuing to look for kicked black holes could have a huge payoff — the chance to see something spectacular.

The astronomers calculated that a merged black hole kicked out of a newly merged galaxy would drag along a large part of its accretion disk. “This would keep the black hole shining even as it wandered off from the center of the galaxy,” Shields said.

The black hole would drag away the inner part of its accretion disk most strongly, Shields said. But outer parts of the disk would also follow. This sets the stage for a magnificent collision in the future, as the lagging portions of the original disk eventually catch up and crash onto the inner part of the disk. (See illustration.)

“We’re talking about millions of solar masses of matter crashing into the accretion disk,” Shields said. “There would be shock waves, and the disk would be heated to millions of degrees, producing X-rays. It’s a potentially dramatic, but relatively short-lived event. It could be brighter than the quasar itself — one of the brightest X-ray events in the universe.”

The crash would create an X-ray flare that lasts a thousand years, he said, virtually the blink of an eye compared the quasar ’s lifetime, which may be tens of millions of years.

Dr. Bonning’s work was funded by a Marie Curie Fellowship. 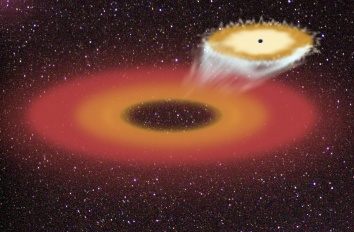