The naming ceremony will take place on July 22, during the semi-annual Board of Visitors meeting to be held at the Observatory. It will be held in the forecourt of the visitors center from 12:45 to 1:15 p.m., and will include the unveiling of the new sign marking the Frank N. Bash Visitors Center at McDonald Observatory.

The media are invited to attend the ceremony and lunch afterward. (RSVPs are required for lunch; see information at end.) In the event of inclement weather, the ceremony will be held inside the dome of the Harlan J. Smith Telescope atop Mount Locke.

Bill and Bettye Nowlin provided major funding for the visitors center. It was their wish that it be named for Bash. The University of Texas Board of Regents recently agreed to the request.

“When Bill and I donated the money to build the McDonald Observatory visitors center, [it was] immediately suggested that the University name the building for us,” Mrs. Nowlin said. “We expressed a bit of hesitation and mentioned that naming it for Frank Bash would be more appropriate. … This month the official name of the visitors center will become ‘The Frank N. Bash Visitors Center’ at our request because we both feel strongly that a person’s life work and their contribution to the greater good is the most important contribution to be recognized by society,” she said.

“Bettye and I decided to help with the construction of the new Frank N. Bash Visitors Center because we sincerely believe in the educational mission of the Observatory,” Mr. Nowlin said. “Frank was very enthusiastic about the need to reach out to the public, to inspire a new generation of youth to pursue careers in science (but not necessarily careers in astronomy), and to help our K-12 science educators in their efforts to teach science in our public schools. The educational and outreach vision that Frank communicated to us, the skill and efforts of the staff of the Observatory, and the new facilities provided in this new Frank N. Bash Visitors Center will help to ensure the future of scientific research and study in America,” he said.

Since stepping down as director in 2003, Bash continued to serve as professor of astronomy at The University of Texas at Austin. In May, he retired from teaching, and is now a Professor Emeritus.

“I’d like to say how honored I feel [about the naming], and how proud I am of McDonald Observatory’s efforts in public outreach and education,” Bash said. He explained the importance of the Observatory’s educational programs, in which the visitors center plays a major role:

“What we’re trying to do is increase the numbers of kids interested in careers in science and technology, by using astronomy in the classroom to pique their interest,” he said. “McDonald has pioneered a re-definition of its role to the society that supports it by taking on this additional obligation to help teachers excite students about science and technology.”

The Frank N. Bash Visitors Center has a staff of 20 and welcomes about 100,000 visitors a year to McDonald Observatory. Inside, visitors learn how astronomers use spectroscopy to uncover the mysteries of the universe in a bilingual (English/Spanish) exhibit called “Decoding Starlight.” The Bash Visitors Center is also used for professional development workshops for teachers (10 are scheduled for this summer) and student field experiences. During the 2005-2006 school year, more than 8,000 students visited the Observatory in person or by videoconference.

The Texas Department of Transportation and The National Science Foundation provided funding for the visitors center through competitive grants.

Note: If you would like to attend the ceremony and lunch afterward, please RSVP to Debbie Sproul at McDonald Observatory by calling 432-426-4186 or via email at etta@astro.as.utexas.edu. 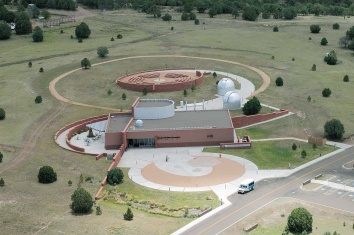 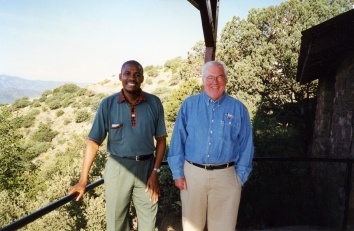