FORT DAVIS, Texas — An international team of professional and amateur astronomers, using simple off-the-shelf equipment to trawl the skies for planets outside our solar system, has hauled in its first "catch."

The astronomers discovered a Jupiter-sized planet orbiting a Sun-like star 600 light-years from Earth in the constellation Corona Borealis. The team, led by Peter McCullough of the Space Telescope Science Institute in Baltimore, Md., includes four amateur astronomers from North America and Europe.

Using modest telescopes to search for extrasolar planets allows for a productive collaboration between professional and amateur astronomers that could accelerate the planet quest.

"This discovery suggests that a fleet of modest telescopes and the help of amateur astronomers can search for transiting extrasolar planets many times faster than we are now," McCullough said. The finding has been accepted for publication in The Astrophysical Journal.

McCullough deployed a relatively inexpensive telescope made from commercial equipment to scan the skies for extrasolar planets. Called the XO telescope, it consists of two 200-millimeter telephoto camera lenses and looks like a pair of binoculars. The telescope is on the summit of the Haleakala volcano, in Hawaii.

"To replicate the XO prototype telescope would cost $60,000," McCullough explained. "We have spent far more than that on software, in particular on designing and operating the system and extracting this planet from the data."

Although astronomers have detected more than 180 extrasolar planets, X0-1b is only the tenth planet discovered using the transit method. It is the second planet found using telephoto lenses. The first, dubbed TrES-1, was reported in 2004. The transit method allows astronomers to determine a planet's mass and size. Astronomers use this information to deduce the planet's characteristics, such as its density.

The team confirmed the planet's existence by using the Harlan J. Smith Telescope and the Hobby-Eberly Telescope at the University of Texas's McDonald Observatory to measure the slight wobble induced by the planet on its parent star. This so-called radial-velocity method allowed the team to calculate a precise mass for the planet, which is slightly less than that of Jupiter (about 0.9 Jupiter masses). The planet also is much larger than its mass would suggest. "Of the planets that pass in front of their stars, XO-1b is the most similar to Jupiter yet known, and the star XO-1 is the most similar to the Sun," McCullough said, although he was quick to add, "but XO-1b is much, much closer to its star than Jupiter is to the Sun."

The astronomer's innovative technique of using relatively inexpensive telescopes to look for eclipsing planets favors finding planets orbiting close to their parent stars. The planet also must be large enough to produce a measurable dip in starlight.

The planet is the first discovered in McCullough's three-year search for transiting extrasolar planets. The planet quest is underwritten by a grant from NASA's Origins program.

McCullough's planet-finding technique involves nightly sweeps of the sky using the XO telescope in Hawaii to note the brightness of the stars it encounters. A computer software program sifts through many thousands of stars every two months looking for tiny dips in the stars' light, the signature of a possible planetary transit. The computer comes up with a few hundred possibilities. From those candidates, McCullough and his team select a few dozen promising leads. He passes these stars on to the four amateur astronomers to study the possible transits more carefully.

From September 2003 to September 2005, the XO telescope observed tens of thousands of bright stars. In that time, his team of amateur astronomers studied a few dozen promising candidate stars identified by McCullough and his team. The star X0-1 was pegged as a promising candidate in June 2005. The amateur astronomers observed it in June and July 2005, confirming that a planet-sized object was eclipsing the star. McCullough's team then turned to the McDonald Observatory in Texas to obtain the object's mass and verify it as a planet. He received the news of the telescope's observation at 12:06 a.m. Feb. 16, 2006, from Chris Johns-Krull, a friend and colleague at Rice University.

"It was a wonderful feeling because the team had worked for three years to find this one planet," McCullough explained. "The discovery represents a few bytes out of nearly a terabyte of data: It's like trying to distill gold out of seawater."

The discovery also has special familial significance for the astronomer. "My father's mentor was Harlan J. Smith, the man whose ambition and hard work produced the telescope that we used to acquire the verifying data."

McCullough believes the newly found planet is a perfect candidate for study by the Hubble and Spitzer space telescopes. Hubble can measure precisely the star's distance and the planet's size. Spitzer can actually see the infrared radiation from the planet. By timing the disappearance of the planet behind the star, Spitzer also can measure the "ellipticity," or "out-of-roundness," of the planet's orbit. If the orbit is elliptical, then the varying gravitational force would result in extra heating of the planet, expanding its atmosphere and perhaps explaining why the object's diameter seems especially large for a body of its calculated mass.

"By timing the planet's passages across the star, both amateur and professional astronomers might be lucky enough to detect the presence of another planet in the XO-1 system by its gravitational tugs on XO-1b," McCullough said. "It's even possible that such a planet could be similar to Earth." 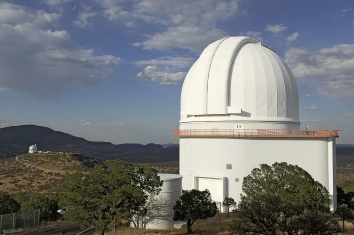