FORT DAVIS, Texas — This is Wildfire Awareness Week in Texas, and McDonald Observatory is introducing our new Fire Marshal, upgraded safety measures, new equipment, and a partnership with the Fort Davis Fire Department.

In 2004, the Observatory formulated a plan to make upgrades in response to an evaluation from the State Fire Marshal. “We developed a plan to get two new positions and make many improvements that would cover four areas: fire, medical response, security needs, and environmental health and safety,” McDonald Superintendent Dr. Phil Kelton said.

The Texas Forest Service provided a grant of $108,000 toward the cost of a new fire truck, and The University of Texas at Austin administration provided $132,000 to complete the purchase. McDonald and UT-Austin jointly funded other needs, such as emergency vehicles, the redevelopment of McDonald’s old well as a secondary water source, and various fire and safety equipment, supplies, and repairs.

Today, Steve Bramlett is the Safety Officer and Fire Marshal for the Observatory. He comes to McDonald after 27 years with the Marshall, Texas Fire Department. During that time, he went from rookie firefighter to Captain. He spent his last eight years there in the training division, and also worked in inspections and fire investigation. During his last four years, post-9/11, he worked on Homeland Security activities.

Now that Bramlett is on the job, he will hire an Assistant Safety Manager. That will bring McDonald’s fire and safety department up to two full-time employees, plus a small group of volunteers.

Bramlett said he plans to recruit additional volunteers, and to start a rigorous weekly training program. “This will raise the level of training to a level that’s never been possible before at McDonald,” Kelton said.

The partnership with Fort Davis will mean that the Observatory’s fire department will be a substation of the Fort Davis Fire Department. A Memorandum of Understanding is under development.

“Instead of two separate groups, we’ll train together and share equipment,” Bramlett said.

The equipment upgrade includes the Observatory’s new, custom-built orange fire truck. Bramlett and Rex Barrick, head of McDonald’s Physical Plant, flew to Idaho to inspect the truck and drive it back to Texas.

Before, the Observatory had “a little one-ton truck with a 300-gallon tank that could pump 200 gallons per minute,” Bramlett said. “It was limited as a grass fire truck.” The new truck has dual capabilities, he said. It can fight both structure fires and grass fires. It can pump 1,250 gallons of water per minute. The Observatory has also purchased a second vehicle for emergency services.

Last July, the Observatory was nationally recognized as a Firewise Community/USA for its efforts in making the Observatory and surrounding community more resistant to wildfires.

“The McDonald Observatory fire safety project was precedent-setting due to the involvement of several state agencies,” said Garland Waldrop, UT-Austin’s Fire Marshal. “The work of personnel within The University of Texas at Austin, State Fire Marshal’s Office, Texas Forest Service, McDonald Observatory Firefighters, and the Ft. Davis Volunteer Fire Department is to be commended.

“The accomplishments of all personnel involved will significantly reduce the risk of incidental fire for McDonald Observatory and Jeff Davis County residents,” he said. “It has been my privilege to work with the personnel from the different agencies to achieve a common goal for the safety and welfare of potentially hundreds of people.” 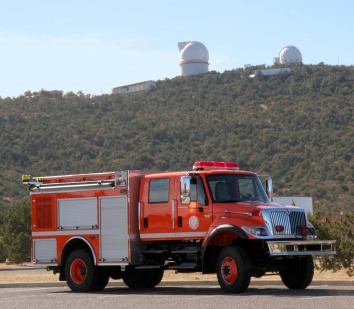 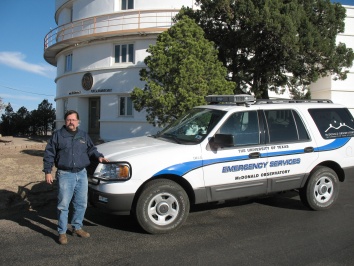