New 'MONET/North' telescope to be dedicated at McDonald Observatory tomorrow

FORT DAVIS , Texas — An international partnership between McDonald Observatory, the University of Göttingen in Germany, and the South African Astronomical Observatory (SAAO) will dedicate a new telescope at McDonald Observatory tomorrow. The media are cordially invited to attend; see details at end.

The 1.2-meter robotically controlled telescope, called MONET/North, is the first of two telescopes planned for the “MOnitoring NEtwork of Telescopes.” The other will be located at SAAO’s Sutherland Station, northeast of Cape Town, South Africa.

MONET/North is housed in an unusual clamshell-style enclosure on McDonald Observatory’s Mount Locke, down the mountain from the large white domes of the Otto Struve and Harlan J. Smith telescopes.

Germany’s Alfried Krupp von Bohlen und Halbach Foundation has funded 90 percent of the MONET project, whose total cost has been about $1.8 million U.S.

The project was initiated by Germany’s University of Göttingen, also a partner in the Hobby-Eberly Telescope located at McDonald. Dr. Frederic Hessman of Göttingen, the MONET project manager, received his doctorate in astronomy from The University of Texas at Austin in 1985.

“The idea for the MONET project started in 1999,” Hessman said. “We originally wanted to put up two small telescopes to monitor the sky for various phenomena. I approached [UT professor] Rob Robinson, who talked to [McDonald director] Frank Bash, at that time.”

Since then, Hessman said, “what started out as a small scientific project has blossomed into a large scientific and educational project.”

When both MONET telescopes are operating, McDonald Observatory astronomers will get 15 percent of the observing time on both telescopes. Göttingen will receive 80 percent for use in both research and education, and SAAO will receive about five percent.

Half of Göttingen’s time will be used by school kids all over the world — including Texas — but with a particular emphasis in Germany’s Ruhr Valley, home of the Krupp Foundation. The time difference of seven hours between Texas and Germany will allow German students participating in the “Astronomie & Internet” project to conduct astronomical observations “live” via the internet during their morning hours of school, while the telescope itself is under a dark Texas sky.

McDonald Observatory also plans to make use of the MONET/North telescope’s educational time for its own educational programs, including professional development workshops for teachers.

Tomorrow’s dedication ceremony will begin at 11:00 a.m. In addition to Hessman and Lambert, other speakers will include Dr. Stefan Dreizler (Director of Göttingen’s Institute for Astrophysics), and Dr. J. Craig Wheeler (UT-Austin astronomy professor and president of the American Astronomical Society).

Lunch at McDonald Observatory’s Firehouse follows the dedication; media are welcome to attend.

At 2:00 p.m., the “First MONET Symposium” will be held at McDonald Observatory’s Visitors Center. More than half a dozen speakers will present talks on using the telescope to search for extrasolar planets, to study galaxies, black holes, and supernovae, and in educational programs for Texas teachers and students.

Tomorrow’s events mark completion of the first third of the MONET project. The next important step is the first public use of MONET/North by German schools, an event that Göttingen and the Krupp Foundation are planning for this fall. Finally, with the planned dedication of MONET/South at SAAO later this year and the connecting of the two telescopes over the internet, Texas astronomers large and small will be able to view the entire sky through MONET’s two telescopic eyes.

Members of the media wishing to attend the dedication should contact Debbie Sproul at McDonald Observatory at 432-426-4186. 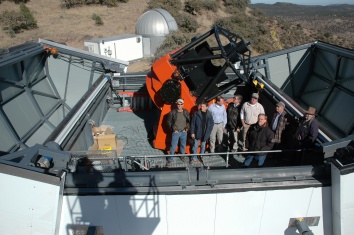 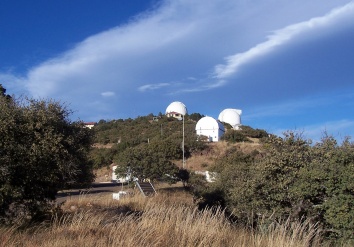 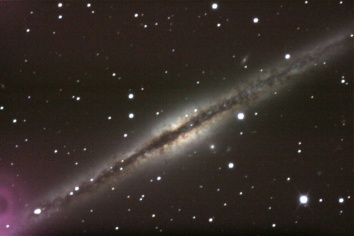