TUCSON, Ariz. — A swirling vat of molten glass is bringing officials and scientists from The University of Texas at Austin and Texas A&M University to Tucson this week. Along with their other five partners, the two flagship universities are celebrating the casting of the first of seven mirrors for the Giant Magellan Telescope (GMT) on Saturday, July 23.

“We're excited to be attending this kick-off event with our partner institutions,” said Mary Ann Rankin, dean of The University of Texas at Austin's College of Natural Sciences.

“This is the beginning of a long journey to construction,” added David Lambert, director of the university's McDonald Observatory. “It's the first very large telescope that's started construction.”

“The casting of the first mirror is critical because everything else depends on getting this one just right,” said Joe Newton, dean of the College of Science at Texas A&M University. “It's such an exciting project. Once finished, this will be the most powerful ground-based telescope in the world.”

Slated for completion in 2016 at a site in northern Chile, the GMT will use its powerful resolution and enormous collecting area to probe the most important questions in astronomy, including the birth of stars and planetary systems in our Milky Way, the mysteries of black holes and the genesis of galaxies.

When complete, the GMT mirrors together “will provide a bigger aperture and better resolution than any telescope now in operation,” Lambert said. The telescope will have four-and-one-half times the collecting area of any current optical telescope and the resolving power of a 25.6-meter (84-foot) diameter telescope - or 10 times the resolution of the Hubble Space Telescope.

The University of Texas at Austin contingent to Tucson will include Rankin and Lambert, as well at Provost Sheldon Ekland-Olson, Astronomy Department Chair Don Winget, several astronomers and a few members of the astronomy program's Board of Visitors.

The casting is scheduled for this week. The University of Arizona's Steward Observatory Mirror Lab has inspected and loaded 40,000 pounds of borosilicate glass into its huge spinning furnace. The furnace has been fired, and will reach its maximum temperature of 2,150 degrees Fahrenheit (1,178 Celsius) on Saturday, July 23.

By then, the glass will flow like honey at room temperature. The thick liquid glass will flow between the dividers in the mold to create a “honeycomb” structure. The oven's rotation rate determines the depth of the curve spun into the shape of the mirror. The final honeycomb mirror will weigh about a fifth as much as a solid glass mirror of its size.

The mirror will take about three months to cool. Then, the lab will wash the dividers out of the mirror's glass honeycomb cells, and grind and polish the mirror to an accuracy of plus-or-minus 15 to 20 nanometers (a nanometer is a billionth of a meter). The mirror ultimately will be coated with a layer of reflective aluminum only 100 nanometers thick at the observatory site, before the telescope becomes operational.

Detailed information about the GMT science goals is available online.

For photos and video from Steward Observatory Mirror Lab: Download high-res images by clicking on ImageBase, under the Services column on the left of the UA News Web page, using search words “gmt” “gmto” “mirror lab” or “steward observatory.” New images will be posted as steps in the casting process occur. New b-roll video of steps in the process will be available from UA News Services after the mirror is cast July 23. 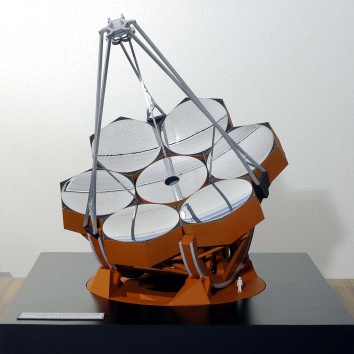