Pinwheel Galaxy from VIRUS (with labels) 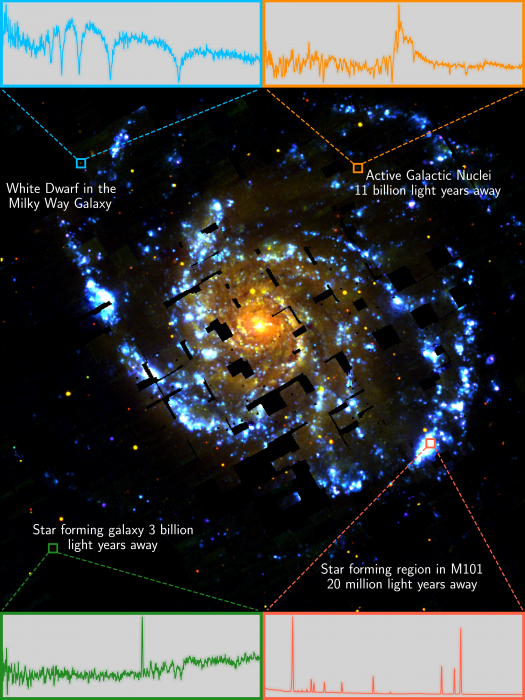 This false-color image of the Pinwheel Galaxy (Messier 101) shows the power of the VIRUS instrument built for the HETDEX survey. The image is a mosaic made up of the central portion of 21 VIRUS pointings across a region of sky about half the size of the full Moon, with some small gaps in coverage. The colors show the contrast between young stars (blue/white) and older stars (red/orange).

Unlike a regular astronomical image, which is essentially made using a sophisticated camera, this image comprises more than 1 million spectra. That is, for every point on this image, VIRUS has recorded the ‘cosmic fingerprint’ of the light using one of its 32,000 optical fibers. So at each point, astronomers have information about the speed, direction, and chemical makeup of the material that produced it. This wealth of information across the entire galaxy presents an unprecedented opportunity to understand the galaxy’s evolution. HETDEX takes this amount of information for every pointing on its survey, making the largest spectral survey of the sky ever, by far.