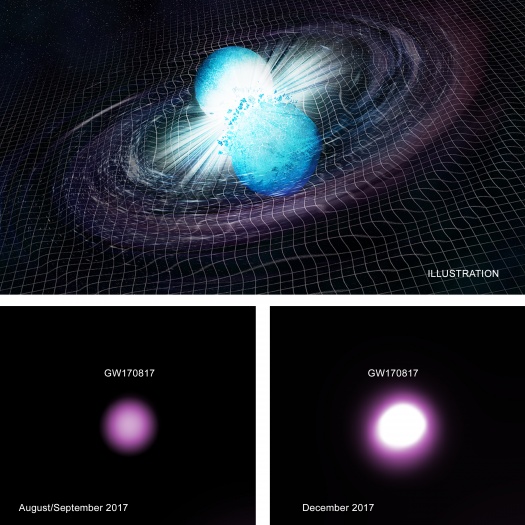 The spectacular merger of two neutron stars that generated gravitational waves announced last fall likely did something else: birthed a black hole. This newly spawned black hole would be the lowest mass black hole ever found.

After two separate stars underwent supernova explosions, two ultra-dense cores (that is, neutron stars) were left behind. These two neutron stars were so close that gravitational wave radiation pulled them together until they merged and collapsed into a black hole. The illustration (top) shows the two neutron stars spinning around each other while merging.

By comparing the Chandra observations with those by the NSF's Karl G. Jansky Very Large Array (VLA), researchers explain the observed X-ray emission as being due entirely to the shock wave — akin to a sonic boom from a supersonic plane — from the merger smashing into surrounding gas. There is no sign of X-rays resulting from a neutron star. Thus, the researchers in this study claim this is a strong case for the merger of two neutron stars merging to then produce bursts of radiation and form a black hole.