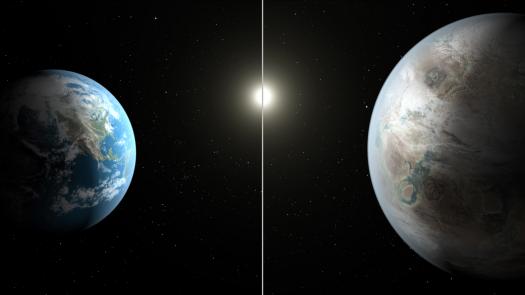 Scientists using data from NASA's Kepler mission have confirmed the first near-Earth-size planet orbiting in the habitable zone of a sun-like star. The habitable zone is the region around a star where temperatures are just right for water to exist in its liquid form.

The artistic concept compares Earth (left) to the new planet, called Kepler-452b, which is about 60 percent larger. The illustration represents one possible appearance for Kepler-452b — scientists do not know whether the planet has oceans and continents like Earth.