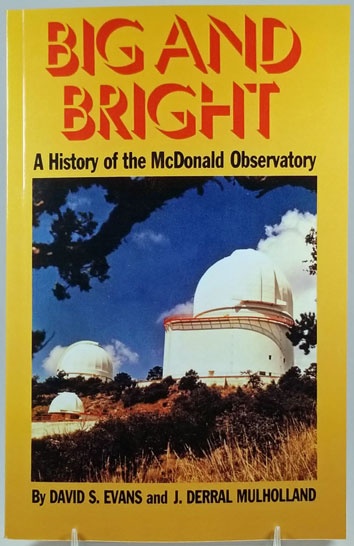 A History of McDonald Observatory by David S. Evans and J. Derral Mulholland.Big and Bright: A History of McDonald Observatory is the story of a remarkable collaboration between two major universities, one a prestigious private school, and the other a growing southwestern state institution. The University of Chicago has astronomers, but its Yerkes Observatory was aging and underfunded; the University of Texas had money for an observatory but no working astronomer to staff it. ut of their mutual need, they formed a thirty-year compact for a joint venture. Unusual in its day, the Yerkes-McDonald connection presaged the future. In this arrangement, one can see some of the beginnings of today's consortium "big science."Now the McDonald Observatory's early history can be put in proper perspective. Blessed with a gifted and driving founding director, the world's (then) second-largest telescope, and an isolation that permitted it to be virtually the only major astronomical observatory that continued operations throughout World War II, the staff of the McDonald Observatory helped lay the foundations of modern astrophysics during the 1940s. For over a decade after the war, a lonely mountain top in West Texas was the mecca that drew nearly all the most important astronomers from all over the world. Based on personal reminiscences and archival material, as well as published historical sources, "Big and Bright" is one of the few histories of a major observatory, unique in its focus on the human side of the story.