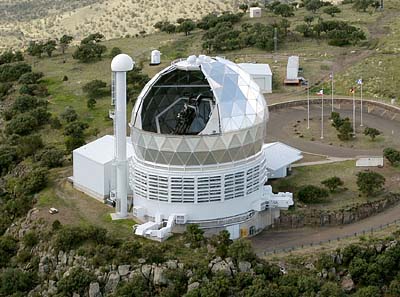 The Hobby-Eberly Telescope was dedicated in 1996. Astronomy is competitive. To attack the big questions, we need to keep investing in forefront facilities. The University of Texas McDonald Observatory can achieve this in a very cost-effective way by upgrading the Hobby-Eberly Telescope (HET) and adding to it innovative new instrumentation. At the same time this upgrade will allow Texas astronomers to answer the biggest question in all of science.

We only understand 4% of what makes up the universe. The nature of dark matter and dark energy is the greatest and most exciting problem in all of science. Dark energy is the name given to the phenomenon of the accelerating universe, whose expansion is speeding up over time.

Science does not know what dark energy is. Is it new particles? Energy of the vacuum of space? A change in the law of gravity? We know how to find out. Texas astronomers can differentiate between these possibilities with new facilities. Explaining dark energy will cause a fundamental change in our understanding of the laws of nature.

HETDEX will upgrade the Hobby-Eberly Telescope to look at 25 times more sky, increasing our field of view to half the area of the Moon. This will be accomplished by adding new optics and an innovative new instrument to the HET, known as VIRUS. The VIRUS instrument will consist of 150 copies of a simple spectograph, replicated cheaply. We are pioneering this approach to save on cost and to remove engineering risk by prototyping the unit.

Together, the upgraded HET and VIRUS will execute the largest astronomical survey ever made. This facility will be unmatched in the world, giving Texas astronomers the ability to survey the sky 10 times faster than any existing facility worldwide. It has the power to address the problem of dark energy. In short, the HET makes HETDEX work.