Sehyun
Institution:
UT- Austin
Exploring the Wonders of the Universe

One of the first things that Sehyun Hwangadmired about the United States was the snow. "In the winter in Wyoming, we had lots of snow, almost every day, and I loved to go skiing with my friends."

Sehyun grew up in Seoul, South Korea, and completed his undergraduate degree at Seoul National University. After getting his Master's degree in physics from the University of Wyoming in 2006, Sehyun moved to the University of Texas to pursue his Ph.D. in astronomy.

The white powder in Wyoming was replaced by watching sunsets on Lake Travis.

Sehyun said his childhood experiences guided his quest to study astronomy. "In the eighth grade, I read books on our solar system, the Universe, and the life in it. I was so absorbed that I stayed up all night reading the books, not getting any sleep. Even now I remember that night," when he was in awe of what he called "the Wonders of the Universe."

Since attending UT-Austin, Sehyun says he enjoys doing research on planetary nebulae, "some of the most beautiful objects in the sky."

When he's not relaxing while watching the sunsets over Lake Travis from the Oasis Restaurant, Sehyun said he enjoys exploring the intriguing city of Austin and planning future road trips across the country. He already has two immediate routes planned out: one that will take him east from New Orleans to Florida along the Gulf Coast, and another that will allow him to explore the Wild West, taking him from New Mexico to California.

Sehyun said, "I am very pleased to work with Prof. Harriet Dinerstein on planetary nebulae, diffuse gas, and the interstellar medium, unveiling the secrets of the Universe, like that night I was fascinated by the Wonders of the Universe." 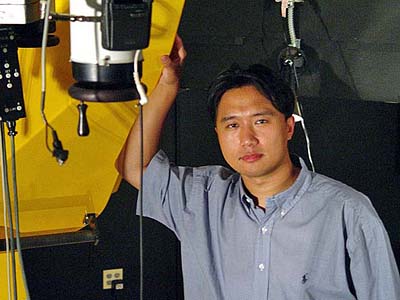