Mary Kay
Mary Kay Hemenway
Institution:
UT-Austin
Degree(s):
Ph.D., University of Virginia
To teach, or not to teach. That is the question.

During the 1960s, most college women were strongly advised to get a teaching certificate. In order to do this at Notre Dame of Ohio, Mary Kay was required to take a certain psychology class, which she adamantly refused because, as she says, "I was so sure I didn't want to teach." Instead, after rejecting a possible major in chemistry and receiving encouraging advice from physics professor Sallie Watkins, she says she decided to pursue physics.

During college she participated in a program sponsored by the National Science Foundation that provided research experience at the National Radio Astronomy Observatory in Green Bank, West Virginia. She says she realized there that "all these people were getting paid to do astronomy" and that it "looked more fun than physics." She then applied to graduate school in astronomy.

Between college and graduate school, Mary Kay spent six weeks at the Royal Greenwich Observatory, which gave her the rare opportunity to live and work in the Herstmonceux Castle. During graduate school she once again found herself overseas to do part of her dissertation in the Netherlands. One of her fondest memories, she says, is from a class she didn't even pay to attend. "I was happy to sit in on "Galactic Dynamics'" since it was the last time it would be taught by the famous astronomer Jan Oort.

Her dissertation focused on astrometry, the study of the positions and motions of stars. By studying certain variable stars, astronomers can discern important distances and thus accurately scale the galaxy.

Coming to Texas over thirty years ago, she made a career in Astronomy Education focusing on innovation and support for college undergraduate non-astronomy-major courses and Teacher Professional Development for K-12 teachers in projects such as the American Astronomical Society Teacher Resource Agent program. The question from her college years about teaching was answered with a career focused on education issues.

During the ’70s Mary Kay taught part-time and started her family. She worked part-time as her children, Anne and Sara, grew up. She also has one granddaughter who is keenly interested in linguistics.

In her free time, Mary Kay says she enjoys playing bridge with the 25 year-old Astronomy Bridge Group. Since they've run out of astronomers interested in playing, they have extended membership to people from other disciplines. Mary Kay is also an avid fan of Texas Women's Basketball. 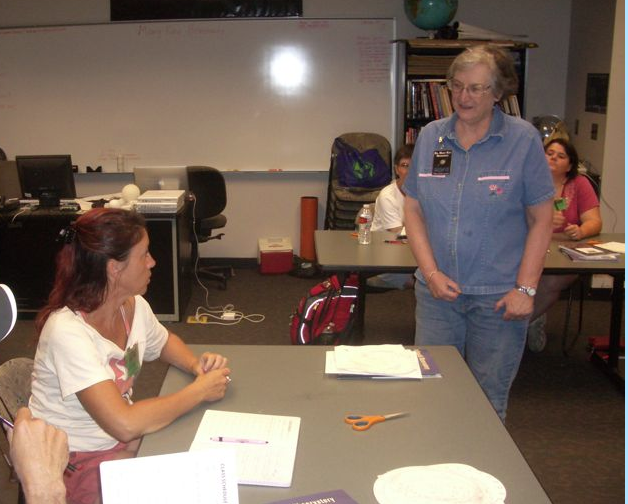