There was a time in Anna Frebel's life when she had to choose between sewing and science.

"I love fashion design," Anna said. "I love to take a piece of cloth and make some fancy clothes out of it." She seriously considered fashion design as a career option in the past. "Everyone told me that since I was a girl, I should go ahead and become a fashion designer, because girls don't do science or anything like that. But now here I am!"

Anna grew up in GÃ¶ttingen, a town in central Germany with a university observatory nearby. "I always wanted to be an astronomer," she said. "I love discovering new things and finding out new things about the universe. I took astronomy in the seventh year of school, and I had a test where I had to draw the constellations on a blue piece of paper with a white pencil. I loved it."

Now working as an astronomer at McDonald Observatory, Anna made an important discovery earlier this year. She used a telescope in Chile to identify one of the oldest stars ever found and calculated its age: more than 13.2 billion years, almost as old as the universe itself, whose age is believed to be 13.7 billion years.

A Few of My Favorite Things

Anna loves Indian food, vegetarian pizza with extra cheese and mushrooms, and dancing Argentine tango with the University of Texas Tango Club. "I don't have as much time to practice tango as much as I would like to because I travel so much," Anna said. "But I do like to see new places."

Her favorite place on Earth, however, has nothing to do with astronomy: She has spent a few vacations in the Whitsunday islands off the northeast coast of Australia and fell in love with the beautiful scenery and the Great Barrier Reef. "You can just jump in the beautiful blue water and swim with clownfish and all these bright tropical fish," Anna said. "It's heaven on Earth." 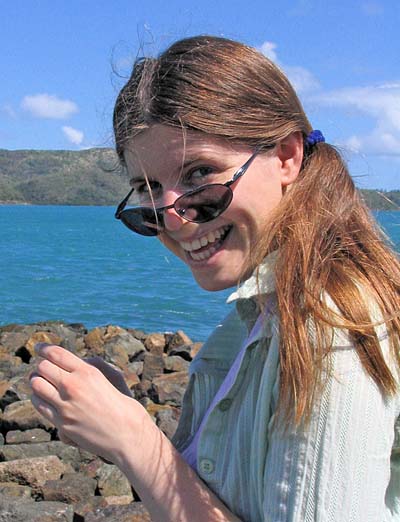