Bi-Qing
Institution:
UT-Austin
I Was Amazed

You could say that gravity drew Bi-Qing For into studying astronomy. When she was a young student growing up in Malaysia, she recalled being awestruck when she watched comet Shoemaker-Levy 9 crash into Jupiter, and knew then that she wanted to study physics and astronomy.

"I was amazed by the gravitational force that perturbed the orbit of the comet so much that it crashed into Jupiter instead of passing by the planet," Bi-Qing said. "I was only 12 years old, and naively decided to study physics and astronomy when I grew up."

Although she said astronomy wasn't a popular subject when she was growing up in Malaysia, "I twisted my parents' arms to buy me a small Newtonian telescope and subscribe me to astronomy-related magazines to learn the basic stuff," Bi-Qing said.

She has since made the jump from that small personal telescope to work on projects using the 2.7-meter Smith Telescope at McDonald Observatory.

Bi-Qing loves to travel, and has made trips to Germany, Luxemburg, the Canary Islands, and the Netherlands. She hopes soon to travel to Australia and New Zealand, as well as many national parks in the United States.

"I love nature and the outdoors," Bi-Qing said. "I like to go hiking, backpacking and leisure cycling." She's also a fan of many recreational sports that involve a racquet: tennis, badminton, table tennis, and racquetball. 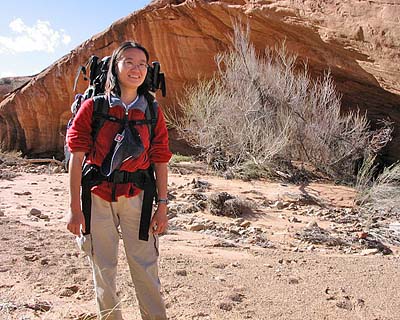