Astronomer by day, astronomer by night, Mark Cornell, is one of those lucky people whose careers intersect their hobbies. For him, this stems in part from a longstanding interest of his: amateur astronomy. "There are two types of astronomers, those who got interested in physics and astronomy in college, for one reason or anotherâ€¦ I'm the other type -- afflicted from youth."

Originally from Alton, Illinois (just outside St. Louis) Mark graduated from Caltech with an undergraduate degree in astronomy. He went on to do graduate work at the University of Arizona, before coming to The University of Texas. After years of heading the computer group -- the team that writes data acquisition software for use at McDonald Observatory and which supports and services the computers in the Astronomy Department -- he has recently gone back into full-time research.

Working in conjunction with Professor John Kormendy and undergraduate student David Fisher, he is investigating the relatively new field of galactic pseudobulges. Overall, he says he feels that his career path has been fairly unconventional. "I've always been more on the technical side of astronomy," he says. Though never formally trained in computer science -- both his graduate and undergraduate degrees are in astronomy -- he has had long experience with computers and writing software, and is intimately acquainted with the systems that the Astronomy Department runs on.

Though an astronomer by day and night, amateur and professional astronomy are hardly the limit of Mark's interests. On the contrary, he enjoys a wide variety of literature, ranging from classic hard science fiction to more modern historical fiction. He has an interest in classical music, with a preference for full orchestra, and he greatly enjoys the theater and films. Perhaps his most surprising non-professional interest is furniture making. Mark builds furniture to aesthetically simple and minimalist designs, making chairs, stepladders, dressers, and cabinets, among other pieces. When observing on his 16-inch Dobsonian telescope he uses a two-foot stepladder built from a traditional Shaker design.

Mark and his wife love animals, a fact attested to by their stewardship of a cat, a dog, and a tank of tropical fish. Mark has always liked shelties, though he doesn't have one now, and though not much of a cat person, he has a great fondness for their once feral cat. His wife breeds and cares for the saltwater fish. 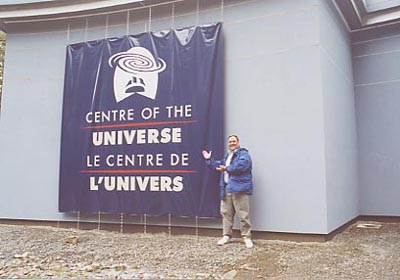