The profession of astronomy comes with both rewards and sacrifices. When post-doctoral student Barbara Castanheira decided to study abroad in America, she left behind her family and her native Brazil because the rewards of her profession were just that great.

Barbara came from the Universidade Federal do Rio Grande do Sul in Porto Alegre, Brazil to The University of Texas as part of a Brazilian fellowship opportunity, coupled with the chance to study with Don Winget - a leading scientist in her area of study. The program she worked under is sponsored by the Brazilian government.

Barbara was born in Alegrete, a small town deep in the southern heart of Brazil, although her family did not stay there for long. Six months after she was born, they moved to Porto Alegre, where she has been ever since.

Before she had even decided that she wanted to be an astronomer, she was already working with Professor Kepler de Souza Oliveira Filho, her current advisor, on the science behind pulsating white dwarf stars. After completing her studies, she won a post-doctoral appointment at the University of Vienna, Austria, which allows her to continue her research at McDonald Observatory.

Barbara says she has a passion for cooking, and is fond of experimenting with different dishes. Although she tends to stick to Italian food, she can cook anything from sushi to Brazilian food.

As a native Brazilian, soccer runs in Barbara's blood. Her favorite team Gremio Football Porto-Alegrense is a local favorite and a source of pride for citizens of Porto-Alegre. Besides soccer, Barbara enjoys volleyball and swimming (she learned how to swim before she learned how to walk). She also likes to try knew sports, like her latest challenge, tennis.

For some, the secret to staying awake late at night on an observing run would be several cups of coffee, but for Barbara, dancing is the perfect adrenaline rush. She is proficient in quite a few forms of dancing, including samba, lambada, forro, and axe. 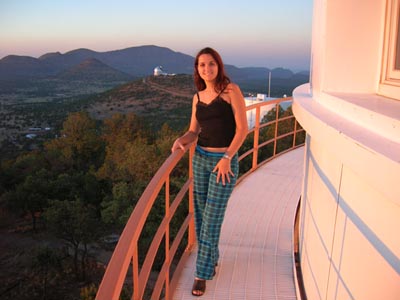