Astronomy always fascinated Amanda Bauer as a child, but she never thought that it could be a feasible career. Although she enjoyed the math club in high school, she really didn't see herself using those skills in later life. In college she studied French as a major for almost a year, but after unsuccessfully attempting to organize a study abroad program at her university, she recognized the tediousness of studying the mechanics of a language while not being able to experience the culture where the language is spoken. She quickly decided to change her major.

Amanda wanted to get into science, but she was unsure of which particular science interested her since her college had no Astronomy department. Since she was enrolled in an introductory astronomy course, she contacted her professor for advice. He offered her a job testing a CCD chip (that is, taking pictures of a blank wall in his basement laboratory) so she accepted the opportunity and changed her major to physics, having no real idea of what she was getting herself into!

She says that inspiration from the stars was severely hampered by the degree of light pollution in the Midwest, but she was convinced that she made the right decision during her first hiking trip to the mountains of California when she saw the Milky Way for the first time. Amanda received her undergraduate degree in physics from the University of Cincinnati in 2002, and her graduate degree at the University of Texas where her major area of study was galaxy assembly and evolution. Following a postdoctoral fellowship at the University of Nottingham in England, Amanda moved to Australia. She maintains a lively blog on astronomy and her travels under the title "astropixie".

Best of all worlds

When Amanda first came to Austin for graduate school, she was excited to find green rolling hills in place of the plentiful cactus and tumbleweeds she naively expected. With the exception of the fire ants that she has unfortunately encountered, she really likes the Austin landscape and wildlife.

Amanda loves live acoustic music and enjoying outdoor activities. She regularly finds time for camping, hiking, and swimming in the abundant fresh water swimming holes around Austin and the Hill Country. She says that the best of all worlds is when she goes camping at music festivals, enjoying the companionship, the great music, the campfires, and sleeping under the stars. 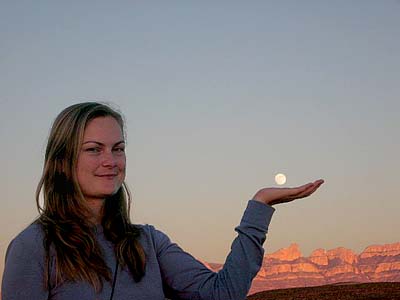