Tom Barnes, Senior Research Scientist of McDonald Observatory, grew up in Ohio, but now considers his hometown to be Austin, Texas. His father was an auditor, and the family moved a lot to accommodate the elder Barnes' job. They moved 13 times before settling in Marion, Ohio, where Tom graduated from high school.

Tom's son Eric and his wife Kari are the parents of Tom's grandchildren, Logan and Trevor, who Tom says are "likely to be spoiled sons of a gun." Tom's other son JB and his wife Nichole had grandchild Mollie. Tom also has two stepdaughters, Jennifer and Jessica, and is married to Cyndee.

"Coffee. Lots and lots of coffee."

While some astronomers may like to focus the telescope on a single astronomical object for several hours, playing video games or listening to music to pass the time, "That's not my style of observing," Tom says. He says he might change targets and adjust his observations every 15 minutes. The key ingredient that keeps him awake while observing at night, he says, is "coffee. Lots and lots of coffee." He prefers Starbucks when he is at home in Austin, but straight, strong, black coffee gets the job done when he is at McDonald Observatory.

"If you can't communicate, you can't do this field."

The foundation in language Tom says he received from a favorite teacher helps him tremendously in his career. "Writing is extremely important, " he states. "If you can't communicate, you can't succeed in this field." He recalls that his high school English teacher, Mary Calhoun, often gave students just one word on the board and asked them to write an essay on that word during the class period.

One thing that Tom thinks the general public doesn't realize about astronomers is how much time they have to spend to "raise money." According to him, a lot of money is required for each observing run to cover travel, lodging, and equipment. While some people may think all these expenditures are magically covered, the truth is that astronomers are constantly selling their projects to various funding organizations to raise money to do the research. The writing skills Tom learned from Ms. Calhoun often come into play when he is writing grants or proposals to get time on telescopes.

Tom says one of the memorable events of his career was a time when he was reading about some observations of a star that showed strange a magnitude change. The researchers couldn't explain what happened. Tom says that while reading this article, the reason "just came to me. I just knew it." He sat down, wrote a paper explaining the behavior, and made a prediction as to what the star might do in the future. Sure enough, another astronomer later confirmed his prediction.

Tom retired from McDonald Observatory in 2014 but remains active in his research. 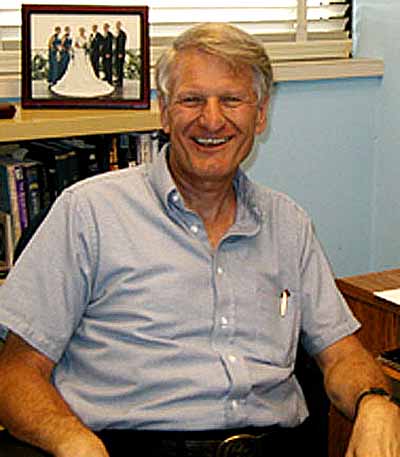